The SL Parade dedicates a three-part series to Indea Vaher’s SRM St Isabella Island, USA…a home that Vaher has shared with the SL Community since 2009.  Recently awarded an LEA Core Grant, Vaher has been offered an invaluable opportunity to reopen her SIM on land provided by this prestigious award.

In her own words, Vaher explains what St Isabella is, as well as the historical context behind its Second Life creation….another excerpt will be provided next Thursday, and will offer a closer look at how St Isabella Island, USA reflects the Gullah culture indigenous to what Wikipedia describes as, “a culture derived from the descendants of enslaved Africans who lived in the Lowcountry regions of Georgia and South Carolina, which includes both the coastal plain and the Sea Islands….” (Gullah, wikipedia) 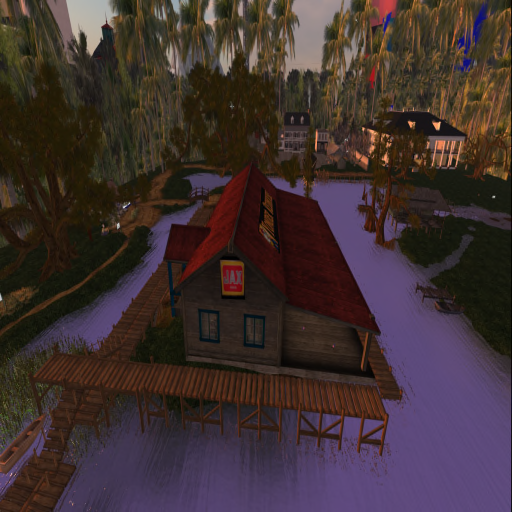 OVERVIEW
The fictional St. Isabella Island was inspired by its RL counterpart a barrier Sea Island, located just off the coast of the USA); because of its proximity St. Isabella Island has been preserved from assimilation for over a hundred years. The islanders speak with a distinct Creole blend of Elizabethan English and African languages, which was born of necessity on Africa’s Slave Coast, and customs preserved from the past the natives of St. Isabella carry on life as if time has stood still. The inhabitants continue with their old way of life; sewing baskets of sweet grass or pine, building flat bottomed boats for fishing and shrimping or dancing under a blue indigo moon.  There you will find live oaks and gigantic angel oaks draped with Spanish moss blowing in the breeze and under its expansive branches is a community meeting place or an isolated clandestine place for lovers to meet. These descendants of Africa, with some Barbadian and Haitian influences were freed at the onset of the Civil war, when the white land owners deserted the island in fear of the Union Army occupation and they have lived in freedom and isolation surrounded by the blue Atlantic, without bridges until recently. The Second Life recreation period is from 1910-1939, when these communities shared a rich culture.

CONFIGURATION
The makeup of the Second Life Island is that of the Gullah and Creole cultures named for the languages spoken. These languages often called patois is a combination of Elizabethan English/French and West African and is still being used along the southeastern Atlantic coast, where it is called Gullah, and in the central areas of the U.S. it is called Creole. The bayous, of the gulf areas, and the swamps and marshes of the southeast have many similarities, as those natives learned to live off the sea which became an integral part of their lives. This SIM has focused on the commonalities of these cultures….

Please look for the next installation relating to Indea Vaher’s St Isabella, USA SIM next Thursday, and thank you for reading The SL Parade!