It was a long time coming, but The SL Parade got a chance to sit down with Scarlett LaRoux!

LaRoux describes these prizes in detail by telling The SL Parade, “…there was a $L30K prize, a trophy, a stream for 3 months:  A lot of things like that. Also  there were opportunities to perform in showcases in venues where I hadn’t performed before….what I learned is that there are a lot of FANTASTIC performers in Second Life, people I would have never met without this contest….I’m so glad I participated…I’ve made some really good friends there.”

LaRoux continues:  “The biggest satisfaction for me was knowing that people like my performances.  I really appreciate that response.  I love to make people feel good/happy.”

When asked how she found out about SL’s Got Talent, LaRoux explains, “I found out about the SLGT contest kind of late in the game, and registered just under the deadline.” 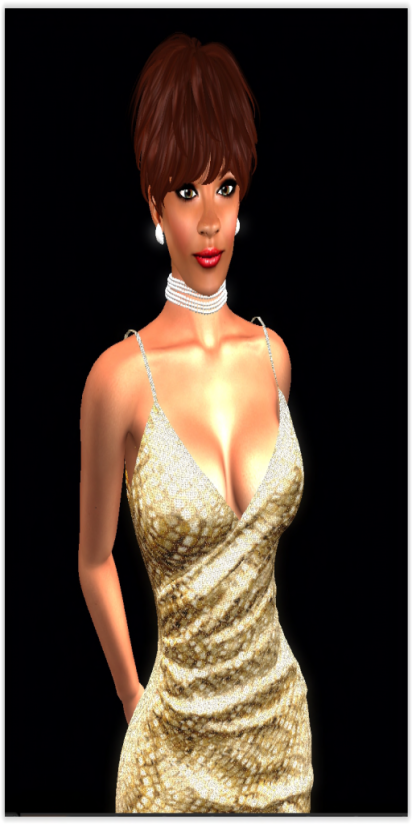 To prepare for the SL’s Got Talent competition, Scarlett LaRoux did what she usually does when she performs:  simply sing the songs she usually sings, and sing them as a way to practice and hone her craft.  She states, “I tend to choose songs that mean something to me, and songs I think an audience can relate to…”

Yet, while song choice plays a pivotal role in how an audience relates to singers like Scarlett LaRoux, its also fair to say that training one’s voice is also very important.  For LaRoux, her training began during her childhood. She explains, “I’ve been singing since I was a child. The earliest I remember is 4 years old. I used to do a lot of programs with my mom at church.  I did the usual chorus and singing groups. I took voice lessons for a summer when I was about 13.  I learned the most important thing with singing:  Breathing.”

Breathing while one sings, according to the “Dummies:  A Wiley Brand” website, consists of taking your breath off of autopilot (Dummies: A Wiley Brand).  The site explains, “Normal breathing involves a shallow inhalation and an even exhalation, followed by a pause before it all starts again. But when you sing, breath control means that you not only need to inhale quickly and exhale slowly as you sing the phrases of a song, but that you also need to maintain proper posture while doing it.” (Dummies:  A Wiley Brand).

LaRoux’s breathing technique was perfected while attending music camp and school.  LaRoux says, ” I attended a music camp when I was 16.  I was supposed to study piano; but I sneaked an application for voice and recorded myself secretly and sent it in.  They gave me a scholarship to attend.  That was one of the best summers of my life.  Then, at 17, I went to Governor’s School in my state, and was dubbed ‘the singing sociologist.’  They let me sing in the chorus…even though I was there to stretch my brain, not my voice.”

Yet, all training aside, LaRoux began to realize she had the talent to sing at an early age.  LaRoux explains, “I started to believe I could really sing when I was asked at 11 years old to sing at a ceremony in my hometown.  It’s very small place, but for a kid it was a big deal.  I had to buy a ruffly dress and everything.”

When asked who encouraged and aided in the cultivation of her talent, LaRoux first describes how she joined her first school-organized choral group.  “…my teacher there, was very encouraging…” LaRoux says,  “and he tested my range, trained my ear, and challenged me almost daily…but the biggest obstacle he had with me is that I was painfully shy.  He helped me with that by being kind and non-judgmental.”

When asked what she considered her voice range to be, LaRoux shared an interesting story.  She explains, “Well, my voice teacher said I was an alto; my choral instructor said I was a soprano.  [Because of their differing opinions,]…I tend to sing what I feel…and I try not to sing things that don’t fit me or my personality.”

For this reason, Scarlett LaRoux prefers to sing Jazz and R&B, but will also supplement her singing preferences with some country tunes, too.  Her preference, in this sense, is based on deeper emotional content, as well as songs that encourage her to better connect to her listening audience.  LaRoux ascertains that she can sing “Almost anything soulful, because music comes from deeper than your lungs and vocal cords; they come from the heart.”

She continues, “When I can invest myself in a song, that’s when I feel the music is purest. To me, all music is related:  like kissing cousins.”

IV.  Scarlett LaRoux:  “I was looking at REALLYMAD Morpork and J Lively to be Contenders for first-place”

When asked what she expected from the SL’s Got Talent competition, Scarlett LaRoux says that she really didn’t know what to expect.  “It was the first contest I’d entered…” she explains, then continues:  “[so] I was in it to figure out how to do the contest and to perform songs that I loved to sing.

Because LaRoux had not idea what to expect from the SL’s Got Talent competition, it initially came as a shock to her when she won.  This shock, in turn lead to her becoming a bit overwhelmed by the accolades and attention she began to receive.  She explains, “After you win, there are a lot of people interested in getting you to do programs, sing for them, complete interviews in writing and live broadcast.  But, then your previous SL remains, so you have to juggle for a while….”

LaRoux continues:  “The thing I got out of the contest that means most to me is that I met some really nice people, some really great performers, and I like to hear them all.  It’s hard to get to all the shows, but I try to drop in, even if only for a few minutes.”

This, along with sharing her talent with the SL community are probably the biggest benefits of participating in the SL’s Got Talent competition.  Reiterating this claim, LaRoux says, “I love to sing.  I sing in the shower, in the car, on the highway, in the grocery store, in my sleep even.  I woke up from anesthesia once singing, ‘Fever.’  I opened my eyes and this lady in a mask was looking into my eyes saying, “You have a really nice voice.”  I guess it could have been worse.”

Though LaRoux’s web page is currently under construction, please feel free to check it periodically by going to the following website:  https://slmusiccommunityco.wixsite.com/mysite/scarlettlaroux.